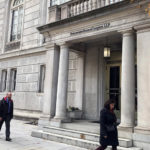 The exterior of PricewaterhouseCoopers in Washington

A federal judge has given the Federal Deposit Insurance Corp. a big win against PricewaterhouseCoopers, a decision that could cost the auditor more than $1 billion in damages and finally put auditors on the hook for detecting fraud.

It’s a new responsibility that these firms have traditionally argued is not the point of an audit.

On Dec. 28, U.S. District Judge Barbara Jacobs Rothstein gave the FDIC a victory on one of three claims it brought against PricewaterhouseCoopers, the auditor of Colonial Bank Group, a financial crisis-era bank that failed after a massive fraud was discovered between the bank and the mortgage originator Taylor Bean & Whitaker.

But the claim — for professional negligence — was the FDIC’s most serious against PwC related to audits of Colonial for 2002 through 2005 and again in 2008.

The case against PwC, and its internal audit co-source vendor Crowe Horwath, for professional malpractice and breach of contract, was the first FDIC suit against an auditor for financial crisis-era bank frauds or failures.

Asked for more details, a spokeswoman for the FDIC said the regulator does not comment on pending litigation.

The Colonial Bank failure cost the FDIC’s deposit insurance fund $2.3 billion, according to the FDIC’s court filing. Judge Rothstein’s decision reduced the potential damages to an estimated $1.4 billion, after determining that a related breach by Bank of America of its custodial obligations to Colonial Bank was not foreseeable by the auditor. A hearing on the damages has not yet been scheduled.

But even the lower award could stretch PwC’s finances since it has already agreed to two additional confidential settlements in the last 18 months, one for a related case brought against the firm by the bankruptcy trustee for TBW and another for the crisis-era failure of brokerage firm MF Global, another PwC audit client.

PwC stopped the TBW trial, and another one in 2017 for claims resulting from the failure of its client MF Global, by agreeing to confidential settlements that were likely more palatable than the combined $6.5 billion originally sought by the trustees for the two bankrupt firms.

Jim Peterson, a former in-house attorney for Arthur Andersen and the author of the book, “Count Down: The Past, Present and Uncertain Future of the Big Four Accounting Firms,” told Marketwatch that he believes PwC U.S. could withstand about $3 billion in payouts over a short period of time.

“The Colonial award will be public and could be more than $1 billion. Combined with the confidential settlements for MF Global and TBW in the last 18 months, the firm is likely already feeling a strain,” he said.

Money-losing investors, and receivers like bankruptcy trustees and the FDIC, bring the largest global audit firms — PwC, Deloitte, KPMG and Ernst & Young — to court quite often. However, the Big 4 rarely go to trial because one catastrophic guilty verdict could put them out of business. In the summer of 2016 alone, PricewaterhouseCoopers LLP, its U.S. arm, faced as many as three significant trials for allegedly negligent audits.

The first PwC case to go to trial came after the TBW bankruptcy trustee went after PwC for not catching the joint TBW-Colonial fraud as auditor of Colonial Bank. The TBW trustee alleged that if PwC, Colonial’s auditor, had caught the fraud there, the losses to TBW shareholders and creditors would have been much smaller.

TBW’s auditor, Deloitte, settled several years ago with the trustee, before a trial started, when it faced a multi-billion-dollar claim from the bankruptcy trustee for its alleged audit negligence. At least eight people at Colonial and TBW, including Taylor Bean Chairman Lee Farkas were convicted or pleaded guilty to participating in the scheme. Taylor Bean filed for bankruptcy in August 2009 and Colonial failed soon after.

PwC didn’t settle the case brought by the TBW trustee until after the trial had started, but not before a few weeks of testimony and evidence of the alleged negligence of PwC auditors to catch the joint TBW-Colonial fraud as the auditor at Colonial was in the public record.

PwC may still face a separate jury trial in Alabama over claims from the FDIC for two more years of audits of Colonial, if the firm does not now settle as a result of this decision. The allegations about PwC’s audits for 2006 and 2007 were split off from the rest of the case because the contract for those years did not ask Colonial to waive a jury trial in the event of a dispute.

Trials can remind the public how often auditors fail to detect frauds and, in the Colonial Bank case, how PwC failed to comply with auditing standards that require them to look for fraud, according to Judge Rothstein.

MarketWatch asked James Langdon, an attorney who frequently defends class actions with law firm Dorsey & Whitney, if he would advise his clients to go to trial given the potential for huge damages to be awarded in this case.

“Every case is different but, yes, if you believe you’re right, as I think PwC does, then you are willing to take a stand and go to trial,” he said.

Each of the recent cases PwC defended at trial were brought by bankruptcy trustees or, in the Colonial case, the FDIC, a receiver of a failed bank. In a bankruptcy case, plaintiffs have significant advantages when suing the auditor that they do not have in a typical case. Those can include detailed reports from a bankruptcy examiner who investigates what happened, often with the full cooperation of the auditor.

“Bankruptcy is special,” Langdon said, “for those reasons, [and because there’s a] general effort of everyone but the defendant, including sometimes judges, to maximize the amount available to the bankruptcy estate to pay creditors. This is a thumb on the scale for anyone suing auditors of bankrupt companies.”

“This case, however, will absolutely also affect non-bankruptcy cases. There are plenty of FDIC cases against auditors right now that are not bankruptcies. It’s going to make those cases more difficult to settle and more likely to try, in particular while this appeal is pending,” he said.

Will auditors change their approach after the Colonial decision?

“Any [penalty] with a ‘B’ in it is going to be an extraordinary burden to any firm,” Langdon said.  “Whether it is enough to tip a firm into non-existence is one thing, but it certainly would be enough to change the cost of the audits going forward.”

For instance, when Deloitte settled crisis-era cases with Bear Stearns and Washington Mutual investors, or KPMG settled with mortgage originators related to the New Century and Countrywide cases, or EY settled with Lehman Brothers investors and the New York Attorney General after years of filings and motions but no trials, partner comments were sealed.

In her decision, Judge Rothstein wrote that PwC admitted that it had failed to design its audits to detect fraud, violating auditing standards, but had agreed during the Colonial trial that it was required to do so. 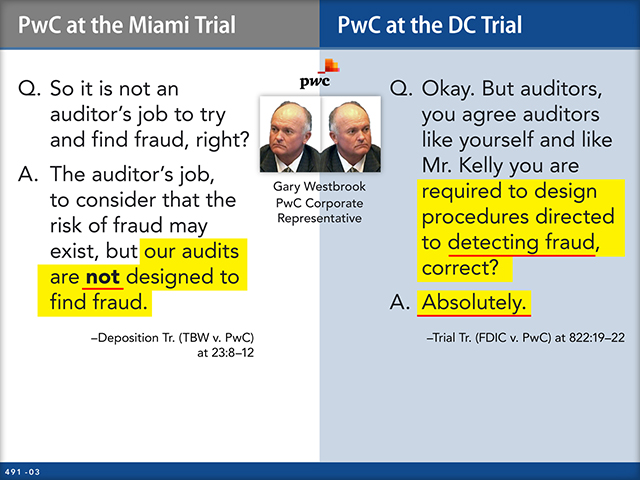 Many of the same PwC engagement partners, audit managers and audit staff who were involved in the Colonial case gave deposition testimony under oath in the TBW trustee’s case. During the TBW case they had all repeatedly admitted that PwC did not design its audits to detect fraud.

Rothstein concluded that PwC “did not design its audits to detect fraud and PwC’s failure to do so constitutes a violation of the auditing standards.”

Rothstein did deny allegations against PwC brought by the bank’s holding company, saying it was barred by the “in pari delicto” doctrine, because it shared blame with its criminal executives. And PwC’s work, Rothstein wrote, was interfered with by executives at Colonial, two of whom have pleaded guilty in connection with the fraud. 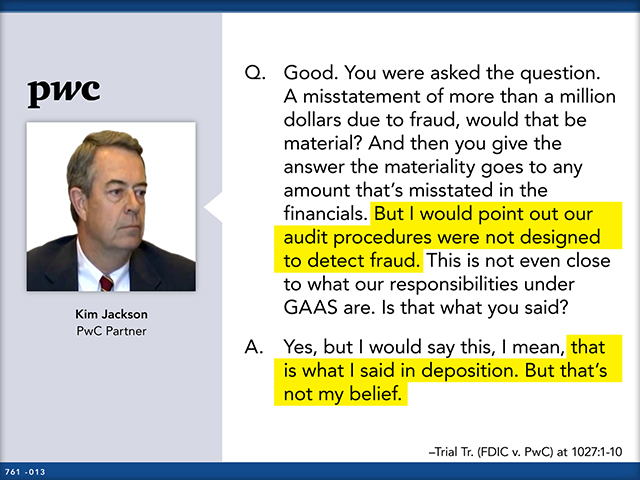 The Sarbanes-Oxley Act of 2002 provides a way for the company or its executives to be prosecuted for audit interference, under Section 303(a), but the Securities and Exchange Commission has never brought any charges against any of the TBW or Colonial executives.

The SEC and the Public Company Accounting Oversight Board, the audit regulator created by SOX, has never brought any disciplinary actions against TBW auditor Deloitte or Colonial’s auditor PwC or any of their partners or employees for the audits of the two firms felled by fraud.

Although the judge denied the FDIC’s and the holding company’s breach of contract damages against PwC under the “in pari delicto” defense, because the criminal Colonial employees were acting as agents of the bank and its holding company, the FDIC, on the other hand, was not precluded from pursuing damages from PwC’s negligence.

The judge’s unwillingness to impute the Colonial Bank employees’ bad behavior to the FDIC is a huge advantage for the regulator, according to Langdon. It is also the basis for PwC’s appeal of the decision.

Was it possible for PwC to detect this fraud?

The fraud between Taylor Bean & Whitaker and Colonial Bank centered on the Colonial’s Mortgage Warehouse Lending Division, where the bank provided short-term funding to TBW so that it could originate mortgage loans. The MWLD provided funding to TBW through various funding facilities, including one called the COLB Facility.

Judge Rothstein wrote in her decision that PwC could have uncovered the fraud simply by inspecting some of the underlying documents for the mortgages at issue, but it didn’t. PwC never inspected nor requested to inspect a single TBW COLB loan document, despite being in the same building as the secured file room. During the TBW trial, Steven Thomas, the attorney for the trustee, quipped, “All you had to do was press ‘B’ in the elevator for basement,” because testimony during the trial based on the trustee’s investigation revealed there were no “participation certificates” for these loans and, therefore, no mortgage collateral.

The judge wrote that, instead of looking at the actual documents, PwC relied on TBW CEO Lee Farkas, to confirm the key information about the collateral underlying the Colonial credit facility for TBW. Using CEO Farkas confirm the existence of TBW’s collateral was “quintessentially the same as asking the fox to report on the condition of the hen house,” Rothstein wrote.

In April 2008, according to the original complaint filed in the TBW case in February 2016, the Office of the Comptroller of the Currency challenged a PwC accounting opinion from 2002 saying that the COLB transactions at Colonial could be accounted for as sales, and therefore receive off-balance-sheet treatment. The OCC’s challenge to PwC’s sales accounting conclusions caused major alarm within PwC, according to the filing.

Westbrook said he forwarded the OCC’s questions to several partners in PwC’s national office, including a specialist named Frank Gaetano, who flew down to Alabama to solve the problem in person with Colonial executives. The original complaint filed by the TBW trustee in February 2016 unsuccessfully attempted to redact several names of PwC executives.

PwC’s review of Gaetano’s work and related emails were introduced by the plaintiffs at the TBW trial. The documents show that Gaetano and his PwC national office colleagues designed the complex justification for COLB sales accounting and Colonial’s management deferred to them. The performance review read, “With respect to Colonial, given the difficult technical issues, lack of understanding exhibited by executive management and the short timeline, Frank did not hesitate in taking charge.”

Gaetano’s actions were endorsed at the highest levels of the firm.

Former PwC Chairman Samuel DiPiazza, now a vice chairman at Citibank and an AT&T board member, sent his congratulations for a job well done on April 20, 2008. “To all of you guys—Thanks a great deal for going far beyond to make this happen on Friday. An incredible professional performance. I doubt the client will ever understand what you guys did to make this happen,” wrote DiPiazza.

Just a year later, the FBI raided TBW and Colonial and both firms were bankrupt.